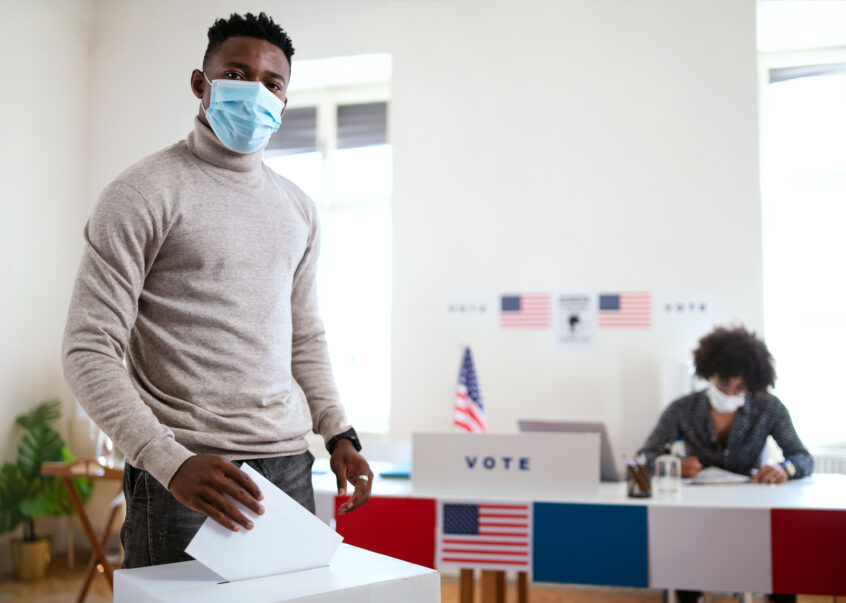 Trump is going to lose this election. But unless he loses BIG, we are in for a bumpy ride over the next several weeks. We can avoid all that if every single person who can vote, and hasn’t already, does vote on November 3rd. Wear a mask, socially distance, and VOTE!

With just a week to go before the election, the US Supreme Court ruled that the state of Wisconsin must put aside any mail-in ballots not received by 8pm on November 3rd, potentially denying the vote to almost 300,000 Wisconsin citizens who have already been sent an absentee ballot but have not yet returned it. They were all told when they received their ballot that their vote would be counted so long as it was mailed and postmarked no later than election day. Now the state is scrambling to make sure voters are aware of the change.

At least 20 other states, however, are still accepting, and intend to count, mail-in ballots that arrive days and even weeks after election day, so long as they have been postmarked by election day at the latest. That means we will not know the absolute final results of this Presidential election until November 28th at the earliest. That is the deadline for all mail-in ballots to be counted and certified in Ohio. Other states have deadlines for receiving mail-in ballots that range from November 4th to November 20th, and of course, after they are received, they still have to be counted.

It is possible, though unlikely, that Ohio will be the deciding factor in who wins this Presidential election. In that case, we will not know who actually won until November 28th or soon thereafter. It is also possible, though unlikely, that the US Supreme Court will rule that counting of mail-in ballots has to stop across the whole country before then. Or that the whole election is declared invalid because of widespread fraud or because the voting systems have been hacked or for any number of other reasons.

And even if the counting continues and Biden is declared the winner, Trump could refuse to accept the results. There could be weeks of chaos and confusion. The election could end up being decided in Congress or in the courts. All of that is possible, but unlikely. Why? Because the most likely scenario is a clear and decisive Biden victory that will be undeniably apparent, even to Trump, by early morning on November 4th.

When all the votes have finally been counted, it is by now an absolute certainty that Joe Biden will have won the national popular vote. If the latest polls are correct, he will have won by as many as 8 million votes or more[1] – two or three times the margin of victory won by Hillary Clinton in 2016. Even if the polls are wildly out, he will win by a larger margin than Hillary Clinton did.

And yet, Donald Trump could still win the election, since it’s the Electoral College that elects the President, not the national popular vote. And all those extra votes for Biden could well come from the states that he is all but guaranteed to win already.

California, for instance, has not voted for a Republican President since the days of Ronald Reagan. Opinion polls in California show Biden ahead of Trump there by nearly 30 points, with more than 60% of Californians saying they will vote for him compared to a little over 30% who say they are voting for Trump. California is the biggest prize of the election, with a total of 55 electoral college votes, all going to whoever wins the most votes in the state as a whole.

Biden is all but guaranteed to win California, as he is his home state of Delaware, but that is a very small state with only 3 electoral college votes. Just as Trump is almost certain to win 19 states[2] in total, so Biden is almost certain to win a total of 18 states[3] plus the District of Columbia. That leaves just 11 states[4] and 2 congressional districts[5] up for grabs in this election. And it means that Joe Biden begins Election Day with a head start of 226 electoral college votes already “in the bag,” compared to 122 for Trump.

So here’s what is most likely to happen, starting at 7:30pm Eastern time on November 3rd. The first confirmed results from in person voting, together with mail-in voting, will start coming in around then from Georgia and North Carolina. These are two key states that Trump won in 2016 and could lose in 2020. If all the polls in North Carolina are correct, Biden will be winning by a larger percentage in counties that Clinton won in 2016[6], and he will be winning back counties that Obama won in 2008.[7]

Georgia has not voted for a Democratic President since 1992, but polls show Biden with a narrow lead here. If he is going to win this state, it should be apparent as results start coming in that he is doing 5-10 percentage points better than Clinton did in 2016.[8]

Ohio is another state that Clinton lost in 2016 but Obama won in 2012. First results from Ohio will be coming in around 8pm, but will only show initial votes from absentee ballots already received. Election Day voting results will start coming in much later in the evening, and final tallies won’t be announced, as we know, until much later, when all mail-in ballots have been finally received and counted. As in other states, however, a comparison of county by county results with the vote from 2016 and 2012 will give a good indication of whether Biden is likely to win this state or not.[9]

Final results will not be available in any of these states for some days or even weeks, and unless Biden is winning by a very large margin, these states will not be “called” on election night. Other battleground states, however, are likely to be called during the night, with enough votes counted to know by morning who is the winner, even if the results are fairly close.

And, of course, it is unlikely that Trump will win all those other battleground states. He is currently leading in the polls in Texas, as well as in Ohio, but even Texas could go to Biden – voting Democrat for the first time in a generation. Every other battleground state in the country shows Biden ahead, even if only by a relatively small margin.

So the good news is that Trump is almost certain to lose this election, and probably by a very substantial margin. The bad news is that we might not know for sure about that for days, or even weeks, after the election.

And here’s the best case scenario: Tens of millions of Americans, who have not yet voted by mail or in early voting, turn up on Tuesday, with masks and socially distanced from each other, to cast their ballot and make this election as decisive as it needs to be to end this nightmare Presidency by Wednesday morning.

If Trump knows that he has lost the election by a huge margin, he could still try to contest the results, or call on his supporters to cause mayhem, or make the transition to a Biden administration as difficult as possible. But he might instead just take his injured ego and go.

He might not want to hang around for more results to come in before conceding to Biden, because to do so would be to admit that he lost hugely and not just by a little. And he might not even bother to hang around the White House trying to cause trouble until Inauguration Day if he’s been humiliated and rejected by the American people. Maybe he’ll up and leave the country while he still can, before an avalanche of court cases start crashing down on him and he faces the real prospect of spending time in jail.

We need to put an end to this administration and move on to the next chapter in American politics. If you have not yet voted, please do so on Tuesday, and help make this dream come true! Because every additional vote for Biden is a reason for Trump to concede sooner rather than later.